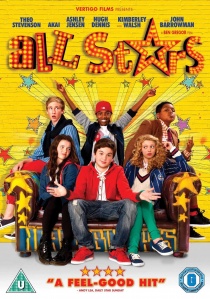 You'll be dancing in the streets this summer with the All Stars! From the makers of Streetdance and Horrid Henry the fun-filled, heart-warming All Stars is released on DVD and Blu-Ray on 26th August 2013, courtesy of Entertainment One.

Ethan (Theo Stevenson) and Jaden (Akai) have a plan - recruit a crew, stage a talent show, raise lots of money and save The Garage (their youth club) from demolition... all whilst Ethan impresses the girl of his dreams with his dancing skills.

The trouble is Ethan can't dance, Jaden's parents have banned him from dancing and the other members of their new crew the 'All Stars' turn out to be totally uncoordinated! Together, they must overcome these many obstacles, starting with convincing Gina (Ashley Jensen), the manager of The Garage, that their plan even stands a chance.

With the demolition men moving in, Ethan and Jaden have to race against the clock to bring everybody together and attempt to pull off the biggest achievement of their lives... proving that if adults are allowed to make all the decisions, we'd have one messed up world! An upbeat, toe tapping soundtrack combined with incredible dance sequences makes All Stars the perfect summer holiday film.