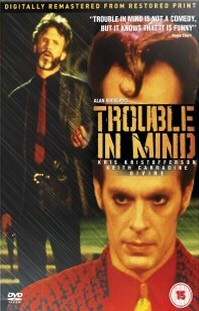 Written and directed by Rudolph (Breakfast Of Champions; Equinox; Mrs. Parker And The Vicious Circle; The Moderns) and starring Kris Kristofferson (Fast Food Nation; The Jacket; the Blade trilogy), Keith Carradine (Dexter; Mrs. Parker And The Vicious Circle; The Moderns), Lori Singer (Short Cuts; Equinox; Fame), Genevieve Bujold (Dead Ringers; The Moderns; Choose Me), Joe Morton (American Gangster; The Night Listener) and Divine (Hairspray; Polyester; Pink Flamingos), Trouble In Mind is a hyper-stylised vision set in a mythical American city during an unspecified era that could equally be the past or the future.

Recently released from prison after serving an eight-year stretch for killing a mob boss, ex-cop Hawk (Kristofferson) returns to his native home of Rain City and takes up residence in a room at the back of the café owned and run by his former lover Wanda (Bujold). At the same time, a beautiful waif-like young woman, Georgia (Singer), her sociopathic boyfriend, Coop (Carradine), and their new-born child also arrive in their trailer and make the café's parking lot their temporary home. Desperately in need of money, Georgia takes on a waitressing job at Wanda's place while Coop slowly but surely is lured into a life of petty crime.

Already a regular customer at the café, Hawk soon falls under Georgia's spell and sets out to seduce her during the lonely nights that Coop is not around. Meanwhile, Coop's criminal activities have attracted the attention of gangland boss Hilly Blue (Divine), a ruthless crimelord whose method of dealing with freelance crooks operating on his turf extends to drowning them in their cars. When Coop's life is threatened by Hilly and his men, Hawk finds himself in a position where he must decide to put his own life on line by helping him or risk losing the woman he most desires.

Humorously and stylistically employing the classic film noir themes of crime, responsibility, loyalty and love, Rudolph's film presents a refreshingly original take on the genre, one that is brilliantly enhanced by composer Mark Isham's (In The Valley Of Elah; The Black Dahlia; Crash) superbly evocative score.