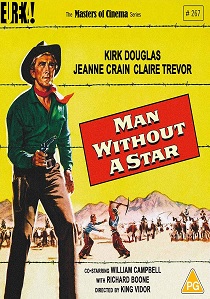 Kirk Douglas stars in Man Without a Star, an exciting King Vidor (Duel in the Sun) Western about a wandering cowboy who becomes embroiled in a bloody dispute between rival ranchers.

Train-hopping his way to Wyoming, nomadic cowboy Dempsey Rae (Douglas) saves the life of young Jeff Jimson (William Campbell; Hush... Hush, Sweet Charlotte). Taking Jeff on as his protégé, Dempsey teaches him the life of a cowhand; how to ride a horse, rope and herd cattle, and how to shoot...

Despite the land they work on being open range, Dempsey is horrified to find the local ranchers are resorting to the usage of barbed wire and refuses to work for anyone who uses it. But when an unscrupulous ranch owner (Jeanne Crain, Pinky) hires a brutal group of killers to push the other ranchers off the land, Dempsey is the only one who can help them fight back.

Director King Vidor expertly blends humour and excitement in this classic action-packed Western, making its UK debut on Blu-ray 15th August 2022 as part of The Masters of Cinema Series.