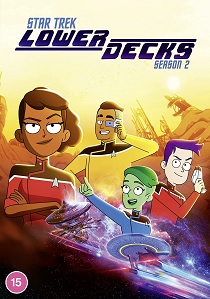 Created by Emmy® Award winner Mike McMahan (Rick and Morty, Solar Opposites), Season Two of the Emmy®-nominated series Star Trek: Lower Decks is bigger, funnier and Star Trekkier than ever before. Follow the adventures of our favourite Starfleet support crew in the U.S.S. Cerritos as they deal with changes in group dynamics, chasing promotions, and tons of sci-fi missions.

This 2-Disc DVD includes every hilarious episode of Season Two, along with over 1 hour of special features, including featurettes, animatics, commentaries and much more! Also features guest appearances by Jonathan Frakes (William T. Riker in Star Trek: The Next Generation) and Robert Duncan McNeill (Tom Paris in Star Trek: Voyager).