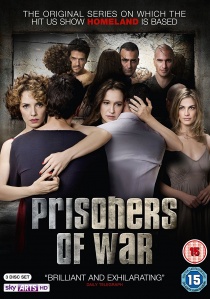 Arrow Films are pleased to confirm the 16th July 2012 DVD box set release of Prisoners Of War (Hatufim), the dark Israeli drama from Gideon Raff that inspired the US television smash Homeland.

Prisoners Of War, or Hatufim (which stands for "abductees" in Hebrew), tells the story of three Israeli Defence Force reservists who are captured behind enemy lines in Lebanon. Their fate is unknown until seventeen years later, when they mysteriously return to their homeland - two of them alive, the third in a coffin.

The story of the three men's time in captivity unfolds across 10 hour-long episodes, as they attempt to reintegrate into society; trying to cope with the pressures of being reintroduced to their families and friends, as well as handling the national hero status being thrust upon them via the public limelight.

The show was written and directed by Gideon Raff and has proved a big hit with the UK critics and public alike. When the show originally aired in Israel 2 years ago, it became the country's highest-rated drama of all time, but before Raff had even started shooting the series, the script was snapped up by 24 writers Howard Gordon and Alex Gansa, who worked alongside Raff on a US counterpart, Homeland.

Homeland, originally aired on Channel 4 in the UK, went on to enjoy phenomenal success worldwide. Starring Damian Lewis and Clare Danes; Homeland won a Golden Globe for Best Television Series in 2011 and is US President Barack Obama's favourite TV show.

Prisoners Of War gives the UK public the chance to see, with shocking honesty, where Homeland came from, Hatufim is the real deal.