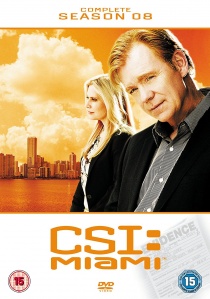 The suspense continues as CSI: Miami Complete Season 8 is released to buy in one DVD box set on 25th July 2011 from Momentum Pictures.

Following the ferocious gun battle of the Season 7 finale, Season 8 opens with CSI Eric Delko (Adam Rodriguez, Ugly Betty) fighting for his life once again. After recovery Delko rejoins the team to solve crimes including an American pop star bursting into flames mid-concert, poisonous jelly fish being used as murder weapons and a crazed gunman attacking the Miami lab. This is the ongoing story of the Miami Dade police department and their mission to control a city ablaze with crime, chaos and violence.

Season 8 also showcases the CSI: Trilogy and cross over episode, which links all three CSI shows as they intertwine for the first time in a three part heart-stopping story. Dr Langston (Laurence Fishburne, The Matrix) travels to Miami to aid a murder investigation with ties to Vegas. In the story, Langston's search for a lost girl turns into a race as it is discovered she is part of a black market human trafficking ring and has been forced to become a surrogate mother as she goes from Miami, to New York and Las Vegas, enabling him to work with the other CSIs to find her.

Meanwhile a deadly serial killer taunts the team by leaving them cryptic hints, with tensions running high as the longer they take to decipher, the higher the death toll rises.

CSI - the acronym for Crime Scene Investigation - tells the story of the little-known and less understood heroes who work crime scenes - the forensic investigators. These are the men and women who work 24/7 to untangle the evidence behind the yellow police tape, piecing together seemingly insignificant puzzle pieces to nail the bad guys and serve those who are most important and sometimes overlooked - the victims.

CSI is the most popular television show on the planet with over 84 million viewers across the world. CSI is now available as complete seasons across the whole franchise and has been a phenomenal success on DVD having sold over 4.5 million copies to date in the UK.

UHD
Fast forward to the 1980s as Wonder Woman's next big screen adventure finds her facing a wide array of foes including Max Lord and The Cheetah as Wonder Woman 1984 flies in on Blu-ray and 4K UHD 22nd ... END_OF_DOCUMENT_TOKEN_TO_BE_REPLACED
Top PicksView