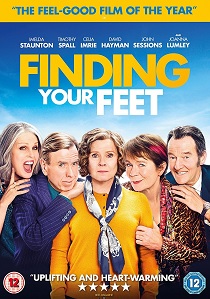 NewsComedyDramaTimothy Spall
News Article Go back to homepage
In Finding Your Feet, released on DVD and Blu-ray 25th June 2018 from Entertainment One, after Sandra discovers that her husband Mike has been having an affair with her best friend Pamela, she sets out on a path of self-discovery, along the way recapturing the happy-go-lucky woman she used to be
Imelda Staunton, Timothy Spall, Celia Imrie, Joanna Lumley, David Hayman
Richard Loncraine
Andrew Berg, Meg Leonard, Nick Moorcroft, John Sachs
Entertainment One
1 hour 51 minutes
25/06/2018
#FindingYourFeet
As an Amazon Associate we earn from qualifying purchases
Buy DVD
Buy BD
Information

When 'Lady' Sandra Abbott (Imelda Staunton) discovers that her husband of forty years is having an affair with her best friend, she seeks refuge with her estranged, older sister Bif (Celia Imrie).

The two could not be more different - Sandra is a fish out of water next to her outspoken, serial dating, free-spirited sibling. But different is just what Sandra needs and she reluctantly lets Bif drag her along to her community dance class, where gradually she starts finding her feet... and romance.

In this hilarious and heart-warming modern comedy, a colourful group of defiant and energetic 'baby boomers' show Sandra that retirement is only the beginning, and that divorce might just give her a whole new lease of life - and love.

Finding Your Feet is released on DVD and Blu-ray 25th June 2018 from Entertainment One.

Related Articles
Paddington 2, Paddington 2, Gypsy: The Musical, Pride, Maleficent, Much Ado about Nothing, Arthur Christmas, The Pirates! In An Adventure With Scientists, The Awakening, Harry Potter and the Deathly Hallows: Part 1, Cranford: The Specials, Three And Out, Harry Potter and the Order of the Phoenix, Freedom Writers, The Wind in the Willows, Chicken Run, Harry Potter and the Order of the Phoenix, Three and Out, The Wind in the Willows, A Confession, Downton Abbey: The Movie, Maleficent: Mistress of Evil, Flesh and Blood, Talking Heads
Early Man, Early Man, The Party, Denial, The Enfield Haunting, Love Punch, The Rise, Room On The Broom, Blandings: Series 1, Love Bite, Sofia, Comes A Bright Day, The Syndicate, Wake Wood, The Fattest Man In Britain, A Series of Unfortunate Events, Chicken Run, Topsy-Turvy, The Changeover, Stanley A Man Of Variety, Summer of Rockets, Mrs Lowry & Son, Dream Demon, Topsy-Turvy: The Criterion Collection, The Sheltering Sky, Secrets and Lies: The Criterion Collection, The Last Bus
A Cure for Wellness, All Good Things, Love Punch, Love And Marriage, Bridget Jone's Diary, Bridget Jones: The Edge of Reason, Wimbledon, Love Sarah, Keeping Faith: Series 3
Absolutely Fabulous: The Movie, Absolutely Anything, Jonathan Creek: The Clue of The Savant's Thumb, Cold Comfort Farm, Sapphire And Steel, Finding Alice
Taboo, Sid And Nancy, Macbeth, A Sense Of Freedom, Fisherman's Friends, The Hatton Garden Heist, Blinded By The Light, The Nest
Ruth and Alex, My One and Only, The Missionary
Comments
UHD Releases News Pick