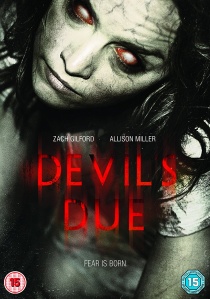 NewsHorror
News Article Go back to homepage
Prepare yourself for the delivery of The Devil's Due out on Digital HD on 2nd June and on Blu-ray & DVD on 16th June 2014 from Twentieth Century Fox Home Entertainment.
Colin Weir, Neil Chase
Andrew Tougas
Neil Chase
Twentieth Century Fox Home Entertainment
6 minutes
16/06/2014
#TheDevilsDue
Thank you for supporting DVD365.net when you order using the link(s) below. As an Amazon Associate we earn from qualifying purchases
Buy DVD
Buy BD
Information

Prepare yourself for the delivery of The Devil's Due out on Digital HD on 2nd June and on Blu-ray & DVD on 16th June 2014 from Twentieth Century Fox Home Entertainment.

After a mysterious, lost night on their honeymoon, a newlywed couple find themselves dealing with an earlier-than-planned pregnancy. While recording everything for posterity, the husband Zach (Zach Gilford: Friday Night Lights) begins to notice odd behaviour in his wife Samantha (Allison Miller: 17 Again). They initially write this off to nerves, but, as the months pass, it becomes evident that the dark changes to her body and mind have a much more sinister origin. What happened on that lost honeymoon night? Instead of bringing life into this world, are the two of them even going to make it out alive?

Matt Bettinelli-Olpin and Tyler Gillett, two members of the critically acclaimed horror directorial group Radio Silence (V/H/S and V/H/S 2), use terrifying 'found footage' camera work to bring the devil to life in The Devil's Due.

Chilling Blu-ray and DVD extras include deleted scenes, viral videos and some shorts from the directorial team Radio Silence.

UHD
Pixar Animation Studios presents Cars, the high-octane adventure comedy that shows life is about the journey, not the finish line, zooming in for the first time on 4K Ultra HD 19th July 2021, exclusive to Zavvi. END_OF_DOCUMENT_TOKEN_TO_BE_REPLACED
Top PicksView