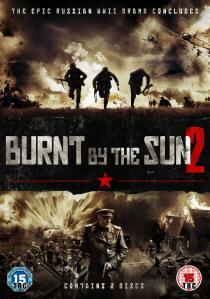 Following the hugely successful Academy Award winning Burnt By The Sun comes its sequel Burnt By The Sun 2, the epic action-packed Russian drama which follows the Nazi invasion of Russia, set in the Eastern Front of World War II, makes its DVD debut on 1st July 2013, courtesy of Arrow Films.

Directed and starring the renowned Oscar winning filmmaker Nikita Mikhalkov, who plays a purged red army general Sergei Kotov who escapes death after German bombers blow up his gulag and is soon left defending the motherland from fascist tanks. Burnt By The Sun 2 had one of the largest production budgets ever seen in Russian cinema and includes the remarkable Citadel, which was the official Russian Oscar entry of 2011 and Exodus.

Set in 1941 Soviet Union leader Joseph Stalin is terrorizing the people of Russia while the Nazis are advancing. Russian officer Kotov, who miraculously survived the death sentence in Stalin's Purge, is now fighting on the front lines. His daughter, Nadia, who survived a rape attempt by Nazi soldiers, is now a nurse risking her own life to save others. In the war-torn nation even former enemies are fighting together to defend their land.

Divisional Commander Kotov returns home during World War II after having been cruelly betrayed, narrowly escaping execution for treason and all but reduced to dust in a prison camp. Discovering that everything has changed and that he will have to fight again for his name and his honour, Kotov once again bears arms and struggles forth.

HotDVDBDTV
DCI Tom Brannick returns, as the murder of a crooked accountant unravels a trail of greed that threatens to expose the true identity of the legendary assassin, codenamed, Goliath in Bloodlands: Series 2 released on DVD and Blu-ray 14th November 2022 from Dazzler Media. END_OF_DOCUMENT_TOKEN_TO_BE_REPLACED
Top PicksView