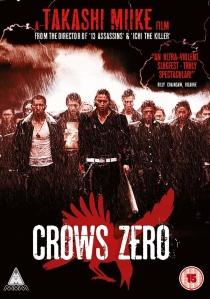 Released on DVD by MVM on 9th April 2012, from prolific and controversial director Takashi Miike, the man behind such diverse cult movie hits as Audition, Ichi The Killer and 13 Assassins, comes Crows Zero, another visionary, super-stylish and off-the-wall study of violence that plays out like a high school version of Fight Club and has been described by as "effective, engaging, touching and hugely entertaining" (Todd Brown, Twitch).

Based on the bestselling manga by Hiroshi Takahashi (screenwriter of the original Japanese Ring movies), Crows Zero is certainly one of Miike's most accessible and commercially successful movies in years, proving to be one of his biggest box office hits to date in his native Japan and even spawning an equally successful sequel.

The notorious Suzuran Senior High School for Boys is Japan's lowest achieving and most violent school, nicknamed "The School of Crows" after its students' tendency to band together in conflicting factions and battling each other for domination. The one thing they all share is a common goal that has never been achieved in the school's history: unification. No single faction has ever reigned supreme. But that could be about to change.

Genji Takiya, a recent transfer student from a rival school, has set his sights on taking over Suzuran High School before graduation. The only person standing in his way is Suzuran's toughest and most respected senior, Tamao Serizawa. It looks like an even match until Genji gains a slight advantage when he finds an unlikely mentor in the shape of Ken Katagiri, an old boy yakuza gang member with something to prove and a score to settle.

Violent, amusing, energetic and effortlessly cool, Crows Zero sees Takashi Miike at the peak of his directorial powers producing a movie that boasts both cult sensibilities and mainstream appeal. 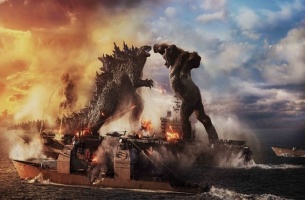 HotDVDBDUHD
Released on DVD, Blu-ray and 4K UHD 14th June 2021 from Warner Home Video, legends collide in Godzilla vs. Kong as these mythic adversaries meet in a spectacular battle for the ages, with the fate of the world hanging in the balance. END_OF_DOCUMENT_TOKEN_TO_BE_REPLACED
Comments
BD Releases News Pick