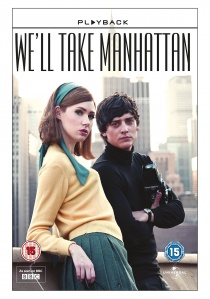 Relive the Swinging 60s and the birth of British fashion in We'll Take Manhattan, out on DVD on 30th January 2012, from Universal Playback. Take home the compelling true story which defined style for a generation in this one-off drama starring Karen Gillan (Doctor Who).

Shown on BBC Four on Thursday 26 January 2012, We'll Take Manhattan focuses on an unpredictable and electric photoshoot for British Vogue in 1962 New York. It reveals how visionary photographer David Bailey (Aneurin Barnard - Ironclad) refused to conform and insisted on using an unconventional and unknown model for the June cover, Jean Shrimpton (Gillan). Over the course of a freezing week in Manhattan, David Bailey realised he had found his muse - someone both he and his camera had fallen in love with. Having thrown out the rule book he made startling and original photographs, which changed the face of fashion and catapulted Shrimpton into celebrity status as one of the world's first ever supermodels.

We'll Take Manhattan brings to life the whirlwind romance between Bailey and Shrimpton and the explosive love affair which inadvertently set the look of the Sixties along the way.

Related Articles
The Split, Lip Service: Series 2, Cardinal Burns, Lip Service: Series 1, The Split: Series 2, The Split: Series 3
SS-GB, The Adventurer: The Curse Of The Midas Box, Cilla, Trap For Cinderella, Citadel, The Facility, Elfie Hopkins, Hunky Dory, Dead In A Week (Or Your Money Back), Radioactive, Time
The Cazalets, Mapp and Lucia, Fleming: The Man Who Would Be Bond, How I Live Now, The Hour: Series 2, Hidden, The Hour, Come Away, The Watch, Hotel Portofino, Mrs Harris Goes to Paris
The Fattest Man In Britain, The Bookshop, The Escape, Whitstable Pearl: Series 1
Tina & Bobby, Not Another Happy Ending, Life on Mars: Series 2, The Good Karma Hospital: Series 3
A Thousand Kisses Deep, Topsy-Turvy, Disobedience, Topsy-Turvy: The Criterion Collection
Comments
DVD Releases News Pick