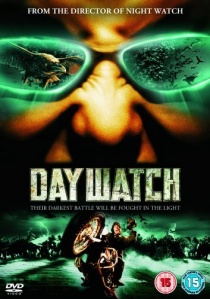 From cutting-edge visionary director Timur Bekmambetov (Night Watch) comes a modern sci-fi thriller which sees the forces of Light clash with The Dark in an epic battle to save existence. A dazzling mix of state-of-the-art visual effects and amazing action sequences, Day Watch is released to buy and rent on DVD on 28th January 2008 from Twentieth Century Fox Home Entertainment as a Director's Cut edition, with an extra previously unseen eight minutes of action.

Set in contemporary Moscow, Day Watch revolves around the conflict and balance maintained between the forces of Light and Dark - the result of a medieval truce between the opposing sides.

Day Watch agent Anton (Konstantin Khabensky) is attempting to find and save his son from the forces of Darkness. However, when Dark Others start mysteriously being killed, Anton is framed for their murders. While trying to escape those looking for his blood, he comes into possession of a device that can restore life to Moscow, a city which comes dangerously close to being destroyed by an apocalyptic event.

Day Watch is based on the best-selling novels of Segei Lukyanenko, and is the highest-grossing ever film in Russian history. A must-see for all sci-fi fans, the DVD includes a 'making of' featurette as well as the original Russian trailer. Day Watch will also be released on 28th January as a double-pack DVD with Night Watch.

HotUHD
A decade-defining classic from the imagination of Steven Spielberg and Chris Columbus, celebrating its 35 year anniversary, The Goonies is released on 4K UHD 31st August 2020 from Warner Home Video. END_OF_DOCUMENT_TOKEN_TO_BE_REPLACED
Top PicksView