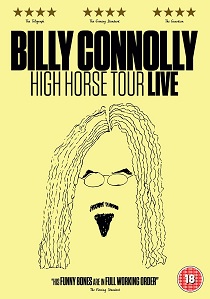 The undisputed king of stand-up comedy is back with a brand new live show, Billy Connolly: High Horse Tour Live, released on DVD and Blu-ray on 14th November 2016, courtesy of Universal.

This is the comedian's first live tour DVD in six years, and one that takes full advantage of the pedigree of a man who has rarely been funnier - the perfect Christmas gift for fans old and new and a truly essential addition to the finest body of comedic work the UK has ever produced.

Ever since his first, iconic appearance on Parkinson back in '75, Billy Connolly has enjoyed an indelible presence in the nation's heart and has been voted the best stand-up comedian ever in three separate polls. Recent years have seen him focus more on travelogues like Billy Connolly Tracks Across America and film work like The Hobbit: The Battle Of The Five Armies but Billy Connolly: High Horse Tour Live see's the Big Yin back with a bang and on typically hilarious form.

Whether recounting being mistaken for a drug dealer in Aberdeen or talking about the perils of driving and smoking at the same time, Billy Connolly: High Horse Tour Live sees the comedy icon on top form, even adding a healthy dose of gallows humour when it comes to discussing some of the crueller things life has thrown at him in recent years.

UHD
The end of the line is only the beginning in a wild, non-stop thrill ride through modern-day Japan as Bullet Train is released on DVD, Blu-ray and 4K UHD 24th October 2022 from Sony Pictures Home Entertainment END_OF_DOCUMENT_TOKEN_TO_BE_REPLACED
Top PicksView