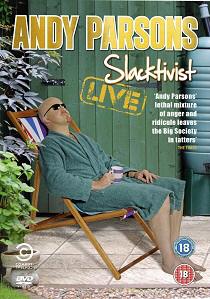 Boris Johnson is the most popular political figure in the country, comedians are being elected into public offices across the world, and professions like the Prime Minister are amongst the least respected jobs in the country... something has to be up!

Star of Mock The Week and one of Britain's sharpest comedians, Andy Parsons, returns to tackle these big issues in his brilliant new DVD which culminates in the ultimate anti-finale... and a 100% Guaranteed way to impress your partner in bed. Slacktivist will be Andy's third and best live DVD to date, available from 25th November 2013, courtesy of Comedy Central.

Mixing topical and political messages with personal anecdotes 'Slacktivist' showcases once again why Andy Parsons is one of the UK's finest topical comedians. From the endless hurdles of security codes to the utterly confusing nature of the Kendal Mint Cake, Andy guides us through the many aspects of modern life that leave him frustrated and yearning for the beauty of doing sod all! How else do you end up naked on a hotel balcony?

Slacktivist will be Andy's first release for Comedy Central UK's DVD brand, and will come packed with extras including exclusive back-stage films and interviews all presented in high quality packaging.

Andy has enjoyed huge success as a writer and performer on television, radio and stage. He was a main writer on the original Spitting Image (ITV), is a regular on Mock The Week (BBC2) and, amongst others, has made appearances on QI (BBC2), The Politics Show (BBC1), Newsnight (BBC2), Saturday Live (ITV) and Live at the Apollo (BBC1). Andy was also in the stellar line up Channel 4's Comedy Gala At The 02. In 2009 he released his debut stand-up DVD, Britain's Got Idiots, followed by his second DVD release, Gruntled, in 2011, both through Universal Pictures (UK).

Andy has toured across the world with his renowned stand-up performances, including appearances at prestigious comedy festivals in Australia, Kilkenny and Edinburgh. Awards include being crowned winner of the 2006 Montreal Comedy Festival 'The Comedy Showdown', winner of the 2004 New Zealand Comedy Guild Best International Act and winner of the 2002 Time Out Best Comedy Award.

DVD
Starring Hugh Laurie and written by David Hare, Roadkill, released on DVD and Blu-ray 9th November 2020 from Dazzler Media, is a fictional thriller about a self-made, forceful and charismatic ... END_OF_DOCUMENT_TOKEN_TO_BE_REPLACED
Hot PicksView