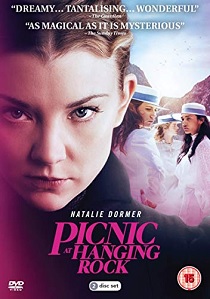 Joan Lindsay's iconic and timeless Picnic at Hanging Rock is set for its hugely anticipated TV reimagining featuring a mesmerising performance from Game of Thrones' Natalie Dormer. Following its run on BBC Two this summer, Acorn Media International is delighted to announce its release on DVD.

Peter Weir's seminal, haunting big screen adaptation gained global critical acclaim following its release in 1975 and now a trailblazing new series is set to re-tell the story of the mysterious disappearance of three schoolgirls and their governess in 1900s Australia.

On Valentine's Day, a group of schoolgirls from Appleyard College take a day trip to dark and brooding Hanging Rock. When three girls and their governess go missing during the picnic, the event rocks not just the school, but the whole town. Theories abound, dangerous secrets are exposed and hysteria sets in, until eventually, the lives of all involved unravel.

With its mysteriously vast narrative, as enthralling as a true crime saga, this gothic tinged six-part drama taps into our fear of the unknown and explores issues of repression, sexuality, freedom and suffocating respectability. It shows the impact of the spreading stain of an unsolved mystery and the immense burden of unanswered questions.

Disappear into the captivating mystery of Picnic at Hanging Rock.