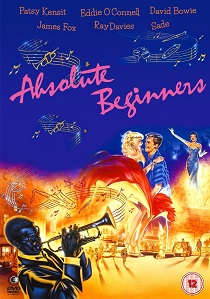 Starring the legendary David Bowie, along with his renowned title track, cult 80s musical Absolute Beginners, one of the most ambitious homegrown productions of the decade, celebrates its 30th Anniversary with a brand new restoration and the first ever UK Blu-ray release thanks to Second Sight.

Helmed by renowned British director Julien Temple (The Filth and the Fury), this impressive production based on Colin MacInnes' revered novel, is brought to the big screen in a lavish musical adaptation.

Featuring an all-star cast including Patsy Kensit (Grace of My Heart), Eddie O'Connell (Sexy Beast), James Fox (Patriot Games), Steven Berkoff (Octopussy) and Smooth Operator Sade, the film gets the high definition treatment with a brand new Blu-ray release which will be available on 25th July 2016 alongside a DVD version.

Set against a backdrop of emerging teen culture and rising racial tension in late 1950s London, Absolute Beginners follows the plight of struggling young photographer Colin (O'Connell), who sees his ambitious, fame-seeking girlfriend Crepe Suzette (Kensit) slipping away as she ruthlessly pursues a career in fashion. To win her back he needs to compromise his idealism and do whatever it takes to make the big time.