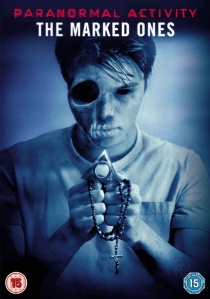 Paranormal Activity: The Marked Ones (2014)

Enter a world of black magic, superstition as the horrifying urban thriller Paranormal Activity: The Marked Ones debuts on Blu-ray and DVD on 12th May 2014, courtesy of Paramount Home Entertainment.

Fans can be the first to bring the terror home when the film arrives on Digital HD two weeks early on 28th April. Paranormal Activity: The Marked Ones expands on the world created by the phenomenal horror franchise with an intense tale of black magic, superstition and possession set in a gritty urban environment.

The Paranormal Activity: The Marked Ones on Blu-ray and Digital HD includes the theatrical version of the film, as well as an extended, cut and intense additional found footage not seen in cinemas.

Are you brave enough to join the marked ones? Find out with your copy of Paranormal Activity: The Marked Ones on Blu-ray, DVD and On Demand this Spring.