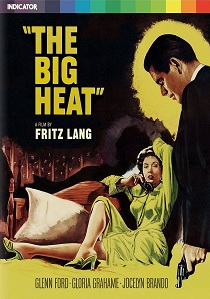 Fritz Lang's iconic film noir masterpiece is an uncompromising exploration of corruption and violence at the dark heart of small-town America. Glenn Ford is the good cop in a bad town, who single-handedly takes on local mobsters headed by Alexander Scourby and his psychotic right-hand man Lee Marvin.

Dave Bannion is an upright cop on the trail of a vicious gang he suspects holds power over the police force. Bannion is tipped off after a colleague's suicide and his fellow officers' suspicious silence lead him to believe that they are on the gangsters' payroll. When a bomb meant for him kills his wife instead, Bannion becomes a furious force of vengeance and justice, aided along the way by the gangster's spurned girlfriend Debbie. As Bannion and Debbie fall further and further into the Gangland's insidious and brutal trap, they must use any means necessary (including murder) to get to the truth.

The Big Heat is released on limited edition dual-format DVD and Blu-ray by Powerhouse Films on 20th March 2017.

DVD
As a collection of history's worst tyrants and criminal masterminds gather to plot a war to wipe out millions, one man must race against time to stop them in The King's Man, released on DVD, Blu-ray and 4K UHD 28th February ... END_OF_DOCUMENT_TOKEN_TO_BE_REPLACED
Top PicksView