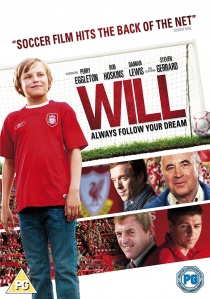 News
News Article Go back to homepage
Starring Damian Lewis, Entertainment One are proud to announce the 27th February 2012 DVD release of Will, the much anticipated film that tells the story of a young boy's emotional journey across Europe to watch the football team that he loves.
Malcolm Storry, Perry Eggleton, Kieran Wallbanks, Rebekah Staton, Bob Hoskins, Damian Lewis
Ellen Perry
Mark Cooper, Raphaël Benoliel, Zack Anderson, Taha Altayli
Entertainment One
1 hour 42 minutes
27/02/2012
Thank you for supporting DVD365.net when you order using the link(s) below. As an Amazon Associate we earn from qualifying purchases
Buy DVD
Information

Entertainment One are proud to announce the 27th February 2012 DVD release of Will, the much anticipated film that tells the story of a young boy's emotional journey across Europe to watch the football team that he loves.

Eleven-year-old Will Brennan's (Perry Eggleton) life is turned upside down when his long-absent father (Damian Lewis) reappears with tickets to the 2005 Champions League Final in Istanbul. But when fate intervenes, Will runs away to Istanbul for the biggest soccer match of the year, searching for meaning in a world that seems to have abandoned him.

Will is a co-production between Istanbul based GalataFilm and LA/UK-based Strangelove Films and is an original screenplay by Zack Anderson and Ellen Perry. It is also the feature directorial debut film of the Emmy-nominated Perry. Her fellow producers include Altayli and Anderson, Stewart Till, Stephen Moffitt, Mustafa Karahan, Muharrem Gulmez, Timothy Nicholas and Mark Cooper.

UHD
Pixar Animation Studios serves up a breakthrough comedy with something for everyone as Ratatouille arrives for the first time on 4K Ultra HD 26th July 2021, exclusive to Zavvi. END_OF_DOCUMENT_TOKEN_TO_BE_REPLACED
Top PicksView