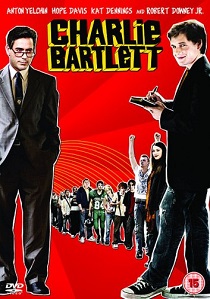 Robert Downey Jr. and Anton Yelchin star in the cool and original comedy Charlie Bartlett, in which a wealthy teenager's foray into bathroom-stall psychiatry becomes a smart, funny and touching battle against the loneliness, angst and hypocrisy of the modern world. Charlie Bartlett is released to buy and rent on DVD on 23rd February 2009 from MGM and Twentieth Century Fox Home Entertainment.

Expelled from yet another private school for his blossoming, though illegal, entrepreneurial activities, wealthy teenager Charlie Bartlett (Yelchin; Alpha Dog, Star Trek) finds himself at regular high school. His smart, geeky appearance gets him a first day beating from the school bully, so his overly medicated mother (Hope Davis; American Splendor; About Schmidt) calls in the family psychiatrist to help him out.

Seeing an opportunity not to be missed, Charlie sets himself up as the school agony uncle, dishing out advice and prescription drugs, courtesy of the family shrink, from the school toilets. His charm, charisma and access to medication soon starts to win him new friends as well as the attentions of the principal's daughter, much to the annoyance of the principal (Downey Jr Iron Man, Kiss Kiss Bang Bang, Chaplin), a man battling his own demons in this provocative and edgy comedy. As Charlie Bartlett's world and fledgling psychiatric practice unravel, he begins to understand there's a whole lot more to making a difference than handing out pills.

Charlie Bartlett marks the directorial debut for Jon Poll, a world-class film editor with deep comic roots, who has previously collaborated with Charlie Bartlett producer Jay Roach on both the blockbuster Meet the Parents and Austin Powers, among others.

Special features on the DVD include a Restroom Confessionals featurette and the Spiral Beach "Voodoo" music video. Don't miss out on your chance to see this irreverent comedy on DVD this February!