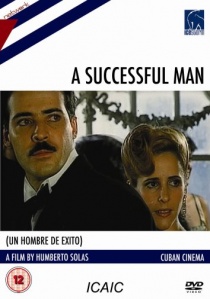 News
News Article Go back to homepage
Network is proud to announce the DVD release of the multi-award winning A Successful Man, on 19th November 2007 directed by Humberto Solas, one of the great film-makers of revolutionary Cuba.
Network
1 hour 44 minutes
19/11/2007
Thank you for supporting DVD365.net when you order using the link(s) below. As an Amazon Associate we earn from qualifying purchases
Buy DVD
Information

Network is proud to announce the DVD release of the multi-award winning A Successful Man, on 19th November 2007 directed by Humberto Solas, one of the great film-makers of revolutionary Cuba.

Spanning many decades of one wealthy Cuban family, A Successful Man (Un Hombre De Exito) follows the story of two brothers, Dario and Javier Argűelles, as they struggle to come to terms with their differing political beliefs before, during and after the Spanish Civil War. Whilst Dario becomes editor of a left-wing newspaper, Javier, who during his student days also sympathised with the Left, steers his way between the two fronts in the political field. Promoted by anarchists he becomes a scrupulous senator. However loneliness is the price he has to pay for his political success...

One of the great filmmakers of revolutionary Cuba, Humberto Solás entered the film industry as a teenager and made his first short film at 18. After taking a film course at Centro Sperimentale di Cinematografia in Rome, he made a big impression with his 1966 medium-length feature Manuela and in 1968 his masterpiece Lucía brought him international recognition. He continued this success throughout the 70s and in the 80s had a major triumph with Cecilia (also available on DVD from Network). He proved he could make a film on time and under budget with Beloved and had another big hit with A Successful Man, which won first prize in the Havana and Cartagena film festivals. The film was the recipient of 10 awards and nominated for a further 8, including a prestigious Palm d'Or at the 1982 Cannes Film Festival. A Successful Man is released the same day as Che Guevara As You Have Never Seen Him Before, The Twelve Chairsand Beloved.