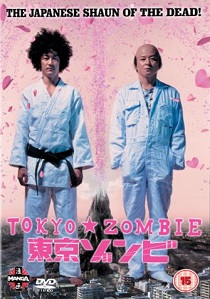 Based on the popular cult manga by Yusaku Hanakuma, and written and directed by Sakichi Sato (writer of Takashi Miike's Ichi The Killer and Gozu and, as an actor, Charlie Brown in Tarantino's Kill Bill: Vol. 1), the zany horror-comedy Tokyo Zombie, released on DVD by Manga Entertainment on 13th October 2008, stars Tadanobu Asano (Mongol; Survive Style 5+; Zatoichi) and Miike regular Sho Aikawa (Zebraman; Gozu; the Dead Or Alive trilogy) as an unlikely pair of heroes hilariously pitted against an army of flesheaters taking over Japan.

On the outskirts of a not-too-far-in-the-future Tokyo a deadly ecological disaster has begun. Black Fuji, a mountainous dumping ground for garbage of every kind - from discarded household appliances to the bodies of those whose passing is best left unreported to the authorities - has begun to 'erupt'. A random combination of toxic trash and biological refuse is causing the buried corpses that litter the area to rise up and seek out the only thing that can ease their eternal suffering and keep them animated... human flesh!

Nearby, but oblivious to the apocalyptic event taking place on their doorstep, a couple of incompetent fire extinguisher factory employees, Fujio (Tadanobu Asano) and Mitsuo (Sho Aikawa), have taken time out from their boring routine to practise a bit of jujitsu. The older of the two, convinced he's dying of cancer, has decided to pass on his martial arts skills to his friend before it is too late. Unfortunately, their boss returns to work sooner than expected and catches the pair wrestling on company time. In the ensuing fracas, Fujio and Mitsuo accidentally kill him and, naturally, can think of only one place to hide the evidence...

Witnessing at firsthand the rising of the undead but, fortunately, assisted by their jujitsu skills, Fujio and Mitsuo manage to fight off the initial surge of zombies and attempt to hightail it out of town with the intention of heading to Russia. However, before they manage to get too far, they bump into and rescue a feisty young woman, Yoko (Erika Okuda, soon to be seen starring in United Red Army), who puts paid to their ill-prepared plans.

The slapstick comedy of Laurel and Hardy meets the gore of 'Dawn Of The Dead' in Tokyo Zombie, a completely off-the-wall, martial arts/horror crossover that breathes light-hearted, laugh-out-loud life into the zombie movie genre.