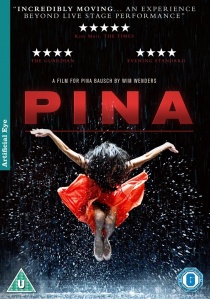 This revolution in film-making and performance art pays tribute to the late German choreographer Pina Bausch and her greatest work. Brilliantly performed by her Tanztheater Wuppertal ensemble, Pina takes its audience on a sensual and visually-stunning journey of dance, movement and music. From the stage and out onto the streets where Pina had lived, this feature-length film draws you into a thrilling experience like no other, capturing the aesthetic of Bausch's energetic and multi-award winning work.

Wenders and Bausch had discussed the collaboration for decades but Bausch tragically and very suddenly died of cancer two days before shooting began in 2009. As a result, the film Pina became homage to Bausch and a dazzling celebration of her life's work. Using archive footage dating back to 1978 alongside subtitled explanations, this is truly a film 'for Pina' rather than about her.

The DVD also contains an interview with director Wim Wenders, as he describes how a time of great loss and reflection was transformed into living art, making Pina a feast for the senses and one of the film events of the year.