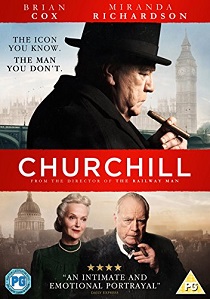 Step into the battle-worn shoes of our country's Greatest Briton as he tackles the most momentous international conflict of modern history as Churchill debuts on Blu-ray and DVD on 16th October 2017, courtesy of Lionsgate Home Entertainment.

Brian Cox (Zodiac, Braveheart) delivers the powerhouse performance of his career, providing an intimate portrayal of the British Prime Minister during the breathtaking 96 hours before the World War II invasion of Normandy. In June 1944, four years after the evacuation of Dunkirk, Winston Churchill finalises plans for the largest amphibian invasion known to man: D-Day.

With time ticking and the horror of lives wasted in past battles weighing heavily on his shoulders, we see Churchill in his most urgent moment. Exhausted by years of war and plagued with the fear of repeating the mistakes that led to the disastrous Gallipoli campaign in WWI, Churchill must draw power from his unflinchingly loyal wife Clemmie, (impeccably portrayed by Miranda Richardson - Sleepy Hollow, The Young Victoria), and lead his nation into battle once again.

With a screenplay by historian Alex von Tunzelmannm, director Jonathan Teplitzky (The Railway Man, Burning Man) has provided the most absorbing, intimate insight into the life of this nation's greatest leader to date.

Related Articles
Stronger, Girlfriends, Tom And Viv, And Then There Were None, The Incredible Adventures of Professor Branestawm, An Inspector Calls, Mapp and Lucia, World Without End, Chicken Run, Churchill : The Hollywood Years, Sleepy Hollow, Good Omens
Rise Of The Planet Of The Apes, Medici: Masters of Florence, The Autopsy of Jane Doe, Forsaken, War and Peace, The Game, Human Universe, Blood, Wonders of Life, As Good As Dead, Exit Humanity, The Slap, Manhunter: 25th Anniversary Edition, Wonders of The Universe, The Sinking Of The Laconia, The Day Of The Triffids, The Water Horse: Legend of the Deep, Zodiac, Running with Scissors, The Bourne Identity: Special Edition, The Bourne Identity, The Bourne Supremacy, The Corruptor, The Ring : Collectors Edition, The Ring, Super Troopers, The X-Men 2, The Planets, Succession: Season 2, The Bay of Silence, Last Moment of Clarity
Spotlight, Ted 2, Return
Equity, Momentum, Bad Blood, Solomon Kane, Fisherman's Friends
Double Identity, Outpost, A Different Loyalty
The Railway Man, Indian Summers: Series 2, The Railway Man
Comments
DVD Releases News Pick

DVD
As a collection of history's worst tyrants and criminal masterminds gather to plot a war to wipe out millions, one man must race against time to stop them in The King's Man, released on DVD, Blu-ray and 4K UHD 28th February ... END_OF_DOCUMENT_TOKEN_TO_BE_REPLACED
Top PicksView