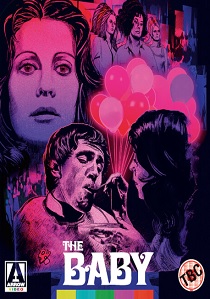 Still traumatised by the loss of her husband, well-meaning social worker Ann Gentry (Anjanette Comer, The Loved One) throws herself into her latest assignment: the case of Baby, a 21-year-old man with the mind of an infant who crawls, cries and has yet to make it out of nappies.

But Baby's family the tyrannical Mama Wadsworth (Ruth Roman, Strangers on a Train) and her two demented daughters aren't the only ones with a warped conception of familial relations, and the full horror only begins when Ann sets her sights on liberating the drooling man-child... and in so doing unleashes the wrath of the Wadsworth women.

45 years after its original release, this film remains one of the most bizarre horror movies ever committed to celluloid. Directed by Ted Post (Beneath the Planet of the Apes, Magnum Force) and co-starring Marianna Hill (Blood Beach, Messiah of Evil), The Baby, released on Blu-ray 24th September 2018 from Arrow Video, is a twisted, psychedelic nightmare of suburban depravity.

BD
Finding praise from critics around the world, Boyhood, following the life of Mason, from early childhood to his arrival at college, is released on Blu-ray and 4K UHD 27th March 2023 from Arrow Films. END_OF_DOCUMENT_TOKEN_TO_BE_REPLACED
Top PicksView