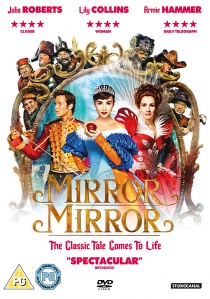 One of the most beloved stories of all time gets a modern make over and comes to life, in this spectacular motion picture event starring Oscar®-winner Julia Roberts as the evil Queen and Lily Collins (The Blind Side) as Snow White. A fresh and funny retelling of the classic fairy tale, the film also stars Armie Hammer (The Social Network) as the Prince, Sean Bean (Game of Thrones) as the King and Nathan Lane (The Birdcage) as the Queen's hapless and bungling servant, Brighton.

Following the mysterious disappearance of the beloved King, his ruthless wife and evil Queen (Roberts), seizes control of the kingdom and keeps her beautiful 18-year-old stepdaughter, Snow White (Collins), hidden away in the palace.

However, when the Princess attracts the attention of the young, handsome and wealthy, Prince Alcott (Hammer), the evil Queen is enraged with jealousy. Aided by witchcraft and her bumbling assistant Brighton (Lane) she plots to steal his heart, which includes banishing Snow White deep into the dark dangerous forest to perish.

Taken in by a band of rebellious but kind-hearted dwarfs living in the forest, Snow White blossoms into a brave young woman determined to save her country from the Queen. With the support of her new friends, she roars into action to reclaim her birth-right and break the Queen's spell cast over her Prince in this visually stunning, magical adventure comedy that captured the hearts and imaginations of audiences the world over.