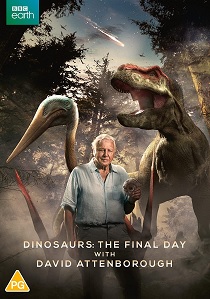 NewsTV SeriesSpecial InterestBBC
News Article Go back to homepage
In a landmark documentary which brings to life, in unprecedented detail, the lost world of the very last days of the dinosaurs Dinosaurs: The Final Day with David Attenborough is released on DVD 18th April 2022 from BBC Studios.
David Attenborough, Robert DePalma
Matthew Thompson
BBC Studios
1 hour 27 minutes
18/04/2022
#DavidAttenborough #DinosaursTheFinalDay
Thank you for supporting DVD365.net when you order using the link(s) below. As an Amazon Associate we earn from qualifying purchases
Buy DVD
Information

David Attenborough presents this landmark documentary which brings to life, in unprecedented detail, the last days of the dinosaurs.

Palaeontologist Robert DePalma makes an incredible discovery in a prehistoric graveyard known as Tanis in North Dakota - fossilised creatures, astonishingly well preserved, that could help change our understanding about the final days of the dinosaurs.

Meanwhile, state-of-the-art visual effects transport David Attenborough back in time to the Late Cretaceous to find out about the creatures which lived at Tanis. Finally, based on new evidence, witness the events minute-by-minute on the day an asteroid devastated our planet and wiped out the dinosaur.

Dinosaurs: The Final Day with David Attenborough is released on DVD 18th April 2022 from BBC Studios.

HotUHD
After moving to a new town, two brothers discover that the area is a haven for vampires as the classic The Lost Boys is released on 4K UHD 20th September 2022 from Warner Home Video. END_OF_DOCUMENT_TOKEN_TO_BE_REPLACED
Top PicksView