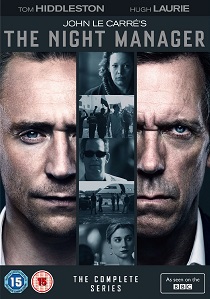 The Night Manager is the first television adaptation of a le Carré novel in more than 20 years and brings together love, loss and revenge in a complex story of modern criminality. The stunning six part series follows former British soldier Jonathan Pine (Tom Hiddleston) who is recruited by intelligence operative Angela Burr (Olivia Colman) to infiltrate the inner circle of international businessman Richard Onslow Roper (Hugh Laurie). To get to the heart of Roper's vast empire, Pine must withstand the suspicious interrogations of his venal chief of staff Major Corkoran (Tom Hollander) and the allure of his beautiful girlfriend Jed (Elizabeth Debicki). In his quest to do the right thing, he must first become a criminal himself.

In Cairo at the height of the Arab Spring, hotel night manager Jonathan Pine receives a plea for help from the beautiful Sophie Alekan. As the mistress of the powerful but dangerous hotel owner, Sophie has evidence of an arms deal that could help crush the popular uprising.

Compelled to do what he thinks is right, Pine makes contact with his friend at the British Embassy. But his actions unwittingly draw into the terrifying world of ruthless arms dealer, Richard Roper. When Sophie's information makes its way to Angela Burr, a government anti-corruption agent intent on bringing down Roper's empire, a leak in her network triggers a chain of events that end in tragedy.