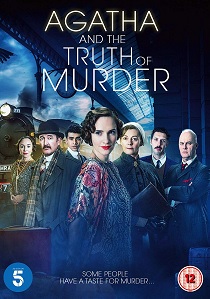 Based on Agatha Christie's eleven-day disappearance in 1926, Agatha & The Truth Of Murder follows a young Agatha Christie as she attempts to solve a real-life murder. When the god-daughter and namesake of Florence Nightingale is found murdered on a train with horrific head injuries, the public outcry and subsequent investigation fail to catch the killer. Driven to distraction by the lack of progress and the failure of the police, Florence's partner of 26 years, Mabel Rogers, begins her own investigation. Mabel identifies a number of suspects, but cannot find any definitive proof which will expose the murderer. At her wits' end, she makes an appeal to the creator of Poirot.

Agatha receives Mabel's request soon after her husband tells her he is in love with a secretary and wants a divorce. Following months of agonising over her novel and a grueling publicity tour, this new blow plunges Agatha into depression. To make matters worse, she is terrified that her ability to confound her audience is coming to an end. Moved by Mabel's plea for help and eager for escape, Agatha agrees to try and solve Florence's murder. Taking a leaf from her own book, she lures the suspects to a country retreat on the promise of an inheritance. To mask her disappearance, Agatha abandons her car and travels in disguise, leaving her husband interrogated by the police, with thousands of officers performing a frantic search for her.

Pursuing a plan based on everything she has learned through her work, Agatha discovers that the mystery of Florence's death is intent on writing itself-this killer is more cunning than her fictional creations. Can she solve the murder and save her writing before her cover is blown and her world crashes down?

Agatha & The Truth Of Murder is released on DVD and Blu-ray 18th February 2019 from Spirit Entertainment.