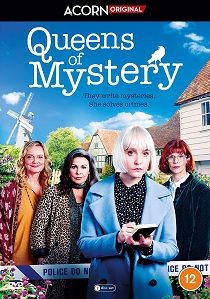 Roll out the red carpet for the Emmy Award-nominated TV hit Queens Of Mystery, which makes its royal premiere on DVD 29th November 2021, courtesy of Acorn Media International.

We follow the entertaining adventures of Beth, Cat and Jane Stone, three crime-writing sisters, who give their 28-year-old detective niece a helping hand whether she wants it or not, as she tackles curious crimes for the Marsh Valley Police.

They use their extensive knowledge of crime - both real and fictional - solving a slew of whodunit murders in their picturesque postcode. But no matter how many cases they crack, the unsolved mystery that haunts them most, is the disappearance of Matilda's mother. Between investigating murders from the curious to the bizarre and writing their own renowned novels, the three aunts also attempt to help their perennially single niece find love.

The series features a stellar British cast including Andrew Leung (Doctor Who) as the dashing Dr. Daniel Lynch and Rebecca Grant (Doctors, Holby City) as his girlfriend Natasha; Michael Elcock is Police Constable Terry Foster and Martin Trenaman (The Inbetweeners) is the dry and put-upon Inspector Derek Thorne.

Make way for the Queens of Mystery as the fabulous first series arrives on 29th November 2021 and coincides with the series two premiere on streaming service Acorn TV.