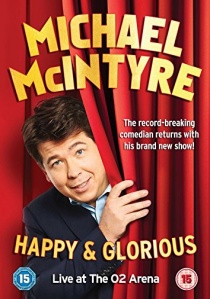 NewsStandup Comedy
News Article Go back to homepage
Following the record breaking successes of Live and Laughing, Hello Wembley and Showtime, Michael McIntyre is back with his brand new show Happy and Glorious, released on Blu-ray and DVD on 16th November 2015 courtesy of Universal Pictures (UK).
Michael McIntyre
Chris How
Michael McIntyre
Universal Pictures (UK)
1 hour 30 minutes
16/11/2015
#MichaelMcIntyre #HappyAndGlorious
Thank you for supporting DVD365.net when you order using the link(s) below. As an Amazon Associate we earn from qualifying purchases
Buy DVD
Buy BD
Information

The UK's number one stand-up comedian, Michael McIntyre is back with his brand new, hotly anticipated show Happy and Glorious. Currently touring arenas across the UK and Ireland, Happy and Glorious is released on Digital Download on 9th November and Blu-ray and DVD on 16th November 2015. Filmed in front of a sold-out audience of 16,000 fans at the 02 Arena, Happy and Glorious is the chance to witness the king of observational comedy at his very best. The perfect Christmas gift for all the family and a must-have addition to the McIntyre comedy DVD collection.

Happy and Glorious sees Michael return to the classic comedy style that helped make his name, as he discusses more hilarious tales of his everyday domestic life with his wife and children. These include their eventful recent move to the country, top tips for keeping his children in check during the school holidays, and even revealing his wife's unusual sleeping habits!

One of Michael's favourite subjects is 'Brits abroad' and the way in which we conquer the final frontier - swimming! Not to be outdone, Michael also shows off his new walk amongst many more hilarious moments that will leave your sides splitting.

Internationally renowned and record - breaking comedian Michael McIntyre has released three best - selling DVDs - Live and Laughing in 2008, Hello Wembley in 2009 (which became the fastest-selling UK stand-up DVD of all time, a record it still holds today) and 2012's Showtime. With 3.3 million DVD's sold to date, Happy and Glorious is set to continue the trend which has seen Michael crowned as the UK's number 1 comedian.