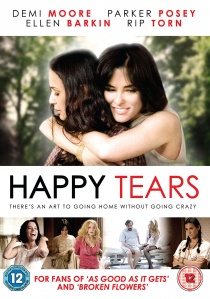 Jayne (Parker Posey) and Laura (Demi Moore) are about to take on the first man they might not be able to handle - their seventy-something-year-old father, Joe (Rip Torn). As dutiful daughters returning to the house they grew up in, Jayne and Laura are forced to take a closer look at their own not-so-perfect lives while dodging childhood memories.

Laura suspects that Joe might need fulltime care but Jayne refuses to believe that their father's condition is that serious. Jayne's compulsion to escape reality only increases Laura's attempts to yank her back down to earth.

Meanwhile, Joe still sings and plays Blues on his prized guitar and the lively widower even has a new lady-friend, shameless and sassy Shelley (Ellen Barkin). But as the visible moments of their father's impending senility increase, the family dynamics spiral out of control. Tensions flare as the close sisters must also juggle their own very different lives  Laura's an environmentalist with a busy work schedule and the mother of three children, and Jayne is desperate to finally have a baby with her workaholic art-dealing husband, Jackson.

Their adventures back home are not without magic, mischief and mayhem and even include a search for buried treasure in the backyard! In the end, any tears that Jayne and Laura might shed will be happy ones.

BD
In Brian And Charles, released on DVD and Blu-ray 10th October 2022 from Mediumrare, an inventor lives alone in a remote village in the countryside, inventing useless things out of found objects in his garage. That is until ... END_OF_DOCUMENT_TOKEN_TO_BE_REPLACED
Top PicksView