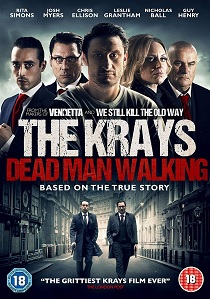 Inspired by true events, a gritty, hard-hitting new feature film The Krays: Dead Man Walking from the team behind Vendetta and We Still Kill the Old Way, tells the shocking, never before told on screen story, of London's most feared and notorious brothers Reggie and Ronnie Kray as they organise Frank 'The Mad Axeman' Mitchell's escape from high security Dartmoor Prison.

The film features a wealth of great British acting talent including EastEnders' favourites Rita Simons as Lisa Prescott and Leslie Grantham as Nipper Read in his last ever role before his recent tragic death and is set for its home entertainment release on 10th September 2018 from 4Digital Media through Sony Pictures Home Entertainment.

December 1966: The Kray Twins rule the criminal underworld of London and beyond with an iron fist. Intent on proving their power to Detective Nipper Read (Grantham), they arrange the risky jailbreak of Frank 'The Mad Axeman' Mitchell and must keep him hidden from the authorities, but that's not an easy task when an ultra-violent, unhinged convict is in your care.

The plan soon starts to unravel as The Kray's henchmen Donoghue and Teddy struggle to handle an increasingly unstable Mitchell. They reluctantly call on the help of a corrupt politician, Lord Boothby, and a tough nightclub hostess Lisa Prescott to keep him under control. As Christmas Day approaches, tensions reach boiling point. The Mad Axeman has become a liability and drastic action must be taken.

The Krays: Dead Man Walking is a brutal, gripping tale of the most revered and feared gangland villains of 1960s London.

Related Articles
Bonded By Blood 2: The New Generation, The Fall Of The Krays, Anti-Social, I Am Soldier, Rise of the Footsoldier 4: Marbella
Kill Keith
Deadtime
The Exorcism of Karen Walker
Comments
DVD Releases News Pick

DVD
Tender and violent, terrifying and comic, The English, released on DVD 19th December 2022 from Dazzler Media., takes the arrows and bullets of its genre only to twist them into a uniquely compelling parable on gender, race, ... END_OF_DOCUMENT_TOKEN_TO_BE_REPLACED
Top PicksView