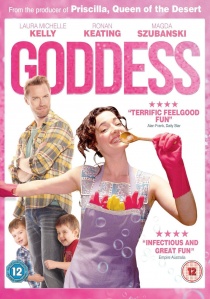 When young mum Elspeth Dickens (Laura Michelle Kelly), mother of naughty twin boys, installs a webcam in her kitchen, her funny sink-songs make her a cyber-sensation. While her husband James (Ronan Keating) is off saving the world's whales, Elspeth is offered the chance of a lifetime. But when forced to choose between fame and family, the newly anointed internet goddess almost loses it all.

From the producers of Priscilla, Queen of the Desert, Goddess is released on DVD by Metrodome Distribution on 25th August 2014.

HotUHD
Say the 'B' word three times and have a wonderful Day-O as Tim Burton's Beetlejuice arrives for the first time on 4K UHD 31st August 2020 from Warner Home Video. END_OF_DOCUMENT_TOKEN_TO_BE_REPLACED
Top PicksView