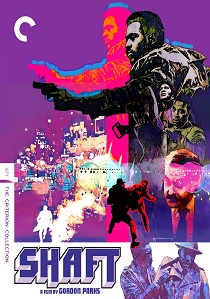 While the Black Power movement was reshaping America, trailblazing director Gordon Parks (The Learning Tree) made this groundbreaking blockbuster, which helped launch the blaxploitation era and gave the screen a new kind of badder-than-bad action hero in John Shaft (Embassy's Richard Roundtree, in a career-defining role), a streetwise New York City private eye who is as tough with criminals as he is tender with his lovers.

After Shaft is recruited to rescue the kidnapped daughter of a Harlem mob boss (Amazing Grace's Moses Gunn) from Italian gangsters, he finds himself in the middle of a rapidly escalating uptown vs. downtown turf war.

A vivid time capsule of seventies Manhattan in all its gritty glory that has inspired sequels and multimedia reboots galore, the original Shaft is studded with indelible elements-from Roundtree's sleek leather fashions to the iconic funk and soul score by Isaac Hayes.

Shaft is given the Criterion treatment and released on Blu-ray 27th June 2022 from Sony Pictures Home Entertainment.

BD
From the acclaimed director of fan-favourites such as Baby Driver, Shaun of the Dead and The World's End comes the tribute to 1960s London in Last Night In Soho, available to own on DVD, Blu-ray and 4K UHD 31st January 2022 ... END_OF_DOCUMENT_TOKEN_TO_BE_REPLACED
Top PicksView