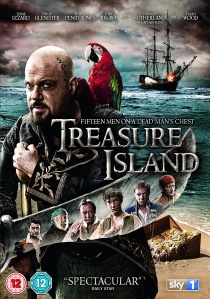 The classic tale of adventure on the high seas gets a gritty, imaginative update this summer as a brand new version of Robert Louis Stevenson's Treasure Island is released on Blu-ray and DVD on 11th June 2012, courtesy of Twentieth Century Fox Home Entertainment.

Featuring a galaxy of acting royalty, including the brilliant Eddie Izzard (TV's The Riches, Ocean's 13) as the treacherous Long John Silver, Philip Glenister (TV's Ashes To Ashes, Bel Ami) as Captain Smollet and Elijah Wood (TV's Wilfred, The Hobbit: An Unexpected Journey) as Ben Gunn, this gripping pirate blockbuster is a fresh take on a salty sea-dog of a story.

When Jim Hawkins (Toby Regbo, One Day, Harry Potter And The Deathly Hallows - Part One) discovers a mysterious treasure map, he is drawn into a murky world of piracy, misplaced trust and adventure on the high seas. Thrust aboard the Hispaniola with a rag-tag crew of dangerous pirates and equally devious gentry, Jim finds himself fighting for the truth, his honour and his life. And as they set sail for buried treasure, Jim embarks on a journey that will change his life forever.

In a fight for Jim Hawkins's soul, who will keep control of the ship? And who will leave the island alive? Swash-buckling, explosive and exquisitely shot, this thrilling drama is not to be missed.

UHD
Say the 'B' word three times and have a wonderful Day-O as Tim Burton's Beetlejuice arrives for the first time on 4K UHD 31st August 2020 from Warner Home Video. END_OF_DOCUMENT_TOKEN_TO_BE_REPLACED
Hot PicksView