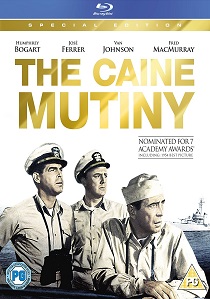 Based on Herman Wouk's Pulitzer Prize novel Sony Pictures Home Entertainment is proud to present the critically acclaimed classic, The Caine Mutiny, available on Blu-ray for the first time from 4th June 2012.

Nominated for seven Academy Awards® in 1954, including Best Picture and Best Actor, The Caine Mutiny is the taut story of the unstable Captain Queeg (Humphrey Bogart) and his tumultuous command of an old minesweeper and her weary crew.

The Caine Mutiny now gets the deluxe Blu-ray treatment and features stunning new high definition picture, explosive sound and is loaded with exclusive special features, including a commentary by Richard Peña and Ken Bowser and the Behind The Caine Mutiny featurette.

On the high seas during the dramatic battles of World War II, Queeg's by-the-book approach pushes his crew and his popular second-in-command, Lt. Maryk (Van Johnson), to breaking point. After a series of questionable orders, Maryk confronts Queeg when he orders the ship directly into the path of a deadly typhoon. Maryk invokes naval code and relieves Queeg of his command, forcing the crew to mutiny. Once safely back in port, Maryk is court-martialled for treason, setting off a tense trial that exposes the true state of Queeg's mind.

Nominated for Best Actor, Humphrey Bogart gives a searing performance as he is systematically broken down in this classic tale of military conduct in a time of war.

DVD
One of the most compelling and conflicted characters in Sony Pictures Universe of Marvel Characters comes to the big screen as Jared Leto transforms into the antihero Michael Morbius as Morbius is released on 4K Ultra HD, Blu ... END_OF_DOCUMENT_TOKEN_TO_BE_REPLACED
Top PicksView