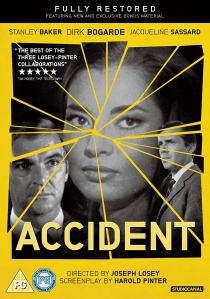 From the director of The Servant and The Go-Between, starring Dirk Bogarde, Stanley Baker, Michael York & Jacqueline Sassard, Accident is released on DVD and Blu-Ray by StudioCanalon 8th April 2013.

A fatal car accident triggers an intense psychological drama in the second of the renowned collaborations between Joseph Losey and playwright-turned-screenwriter Harold Pinter. Reuniting the pair with Dirk Bogarde, the star of their first project, The Servant (1963), Accident is based on a novel by Nicholas Mosley and remains one of Losey's most "penetrating and pessimistic studies of human frailty"

Accident centres on a middle-aged man in crisis. Dirk Bogarde plays Stephen, a married Oxford don, seemingly content in his marriage to Rosalind (Vivien Merchant, wife of Harold Pinter) but underneath starting to fear emotional rot and feeling the social wounds of tutoring students above his station. Also silently resentful of his colleague Charley (Stanley Baker) and his sexual prowess, not to mention his burgeoning TV career, Stephen remains-functionally-drunk as often as possible.

One night he is horrified when a car crashes near his country house in the middle of the night; finding the crash has killed William (Michael Yorke, in his screen debut) one of his aristocratic students with whom he has been locked in a duel of egos, jealous of the boy's youthful vitality. The survivor is William's fiancée, the enigmatic Anna (Jacqueline Sassard) who Stephen has been longing for an affair with, realising she could either revitalise - or ruin - his life.

As the previous months' events gradually unfold in flashback over a hot summer we see Stephen facilitating the original meeting between William and Anna, his seemingly magnanimous intentions concealing a rising tide of anxiety, self-centredness and sexual frustration. It soon becomes clear the recent car crash was no "accident" but rather mysteriously self-inflicted, a murderous final gesture or a collectively willed catastrophe.

Winner of the 1967 Grand Jury Prize at the Cannes Film Festival, Accident was also nominated for 4 BAFTAs including Best British Film. This Home Entertainment release features the (year) restoration undertaken by the BFI, arriving on blu-ray for the first time. New exclusive extras created for the release include new interviews with film critics and Pinter ands Bogarde experts to contextualize the achievements of one of the seminal films of 1960s British cinema.