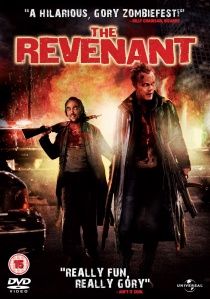 The wonderfully gory and gut-splattering The Revenant, available to own on DVD & Blu-ray from 2nd April 2012 from Universal Pictures (UK), is the action-packed, dark, Zom-Buddy film of the year! Having won 18 awards at International Film Festivals to date, the cool, inventive and blood-gushing film is a fresh take on the tale of the undead not to be missed!

Bart (David Anders - Vampire Diaries, 24), a soldier serving in Iraq, wakes up the morning after his own funeral, to find he's not only still alive but has been resurrected as The Revenant, or one who has returned from the dead...

Unable to ignore his newfound thirst for blood, Bart knows that there is one person in his life whom he can rely on for help: his slacker best friend Joey (Chris Wylde - Fred: The Movie). Although Joey seems to have painlessly moved on in life, friends are friends and Bart is enthusiastically welcomed back, even as a zombie that needs to drink blood to stop the decomposition of his body. The best friend duo quickly realise Bart's zombie-fied state is a perfect opportunity for them to become vigilante crime fighters and they soon begin killing the city's lowlife criminals who conveniently provide a steady supply of blood for Bart...

However, their series of violent escapades soon become more gruesome than ever expected, as their misadventures escalate out of control, with horrifying consequences.

UHD
With all the heart and humour audiences expect from Walt Disney Animation Studios, Big Hero 6, released on 4K UHD for the first time 30th August 2021 and exclusive to Zavvi, introduces you to a lovable robot who will change ... END_OF_DOCUMENT_TOKEN_TO_BE_REPLACED
Top PicksView