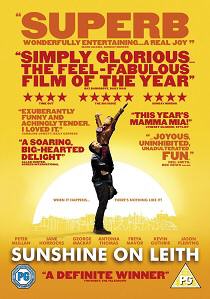 Dexter Fletcher directs this cinematic adaptation of the acclaimed stage musical featuring the music of Scottish band The Proclaimers, as Sunshine on Leith is released by Entertainment in Video on DVD and Blu-Ray on 27th January 2014.

Home is where the heart is for best pals Davy and Ally. Returning from duty in Afghanistan to their lifelong residence in Leith, just outside Edinburgh, the lads kindle romances old and new: Ally with Davy's sister Liz, and Davy with Yvonne, his little sis's best friend from work. Meanwhile, their parents Rab and Jean are busy planning their 25th wedding anniversary. Everything's going swimmingly, until a revelation from Rab's past threatens to tear the family and all three couples apart.

Dexter Fletcher directs Sunshine on Leith; a jubilant, heartfelt musical about the power of home, the hearth, family and love, adapted from the acclaimed stage musical by Stephen Greenhorn and featuring the euphoric music of The Proclaimers.