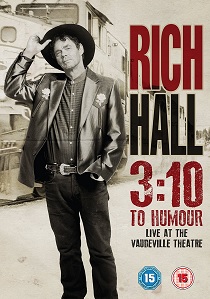 Catch the award-winning Rich Hall at his very best as the king of rapid fire wit takes to the stage in front of a sold-out audience at London's Vaudeville Theatre in 3:10 To Humour.

Renowned for his expertly crafted tirades and quick fire banter with audiences, Rich Hall's plain-spoken growling indignation and acerbic observations have an unerring knack for hitting his targets with precision every time. In Rich Hall - 3:10 To Humour armed with his trusty guitar, Hall mixes skilful stand up and melodic interludes with a dash of common sense to take a topical swing at the eccentricties of British life, modern relationships and the turbulent political landscape in his native and adopted lands.

With fans all over the globe, Rich has won numerous awards for his live comedy including the coveted Perrier Award (Edinburgh Fringe Festival) plus the prestigious Barry Award (Melbourne International Comedy Festival, 2013).

Released on 28th November 2016 on DVD and Digital Download, Rich Hall - 3:10 To Humour once again proves the award-winning Montana native is the master of absurdist irony and is the ideal choice for comedy fans this Christmas!