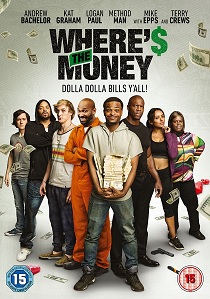 Bachelor stars as a scrappy young man from South Central Los Angeles who plots to become the first black member of an all-white college fraternity in order to recover a stash of stolen money hidden in the flophouse-turned-frat house before his crazy, gun-wielding uncle gets there first.

He is joined by a star-studded cast, including Kat Graham (The Vampire Diaries, All Eyez on Me), YouTube sensation Logan Paul (The Thinning, The Space Between Us), Allen Maldonado (Straight Outta Compton, Black-ish), Josh Brener (Silicon Valley, The Internship), Devon Werkheiser (Sundown, Bad Sister), and Method Man (Keanu, Trainwreck), with Retta (Parks and Recreation, Fracture), with Mike Epps (Girls Trip, Meet the Blacks), and Terry Crews (Brooklyn Nine-Nine, The Expendables 3) in a laugh-out-loud comedy that proves the only colour that matters is green!

In this outrageously fresh comedy, Del (Bachelor), a quick-witted young man from the streets of South Central Los Angeles, learns that his still-in-prison father (Epps) and just-out-of-jail uncle (Crews) stole a million dollars and stashed it in the basement of an old flophouse. There's just one problem: A major university is encroaching on the 'hood and that old flophouse is a newly gentrified (all-white) fraternity house.

Now, with the help of his dream woman (Graham) and best friend (Maldonado), Del must rush the frat, ingratiate himself with the fraternity brothers (Paul and Brener), and grab the cash before his crazy, gun-wielding uncle (Crews) or a local gangster (Method Man) get there first.

UHD
An expert cutter must outwit a dangerous group of mobsters in order to survive a fateful night in The Outfit, released 1st August 2022 on DVD, Blu-ray and 4K UHD from Dazzler Media. END_OF_DOCUMENT_TOKEN_TO_BE_REPLACED
Top PicksView