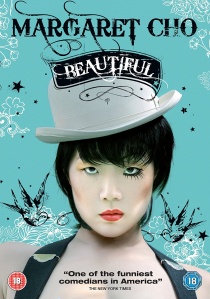 In Beautiful, Cho tells the story of learning to love her luscious self over the past forty years, realising that the eye of the beholder doesn't hold all the power when it comes to beauty. Our tastes may be groomed by the media, but how we feel about how we look brings our self-image into focus. Armed with something more potent than lip gloss - a mouth so shocking and raunchy it should be stamped with a warning - Cho toured America with her manifesto: 'This show is really about how we should feel beautiful', says Cho. 'When you feel beautiful, you're going to have more of a willingness to use your voice to speak.' Shot at the Long Beach Terrace Theater, Beautiful, explores the good, bad, and downright ugly in beauty, and the unattractive politicians and marketers who shape our world.

Cho has gained celebrity status in the U.S. over the course of her career, starring in her own television programme on VH1, The Cho Show. She is also on the cast of Lifetime's Drop Dead Diva, was a contestant on ABC's Dancing With the Stars and has even appeared on NBC's 30 Rock as North Korean dictator Kim Jong-il!

Margaret Cho took the Edinburgh Fringe Festival by storm this summer with her first Festival run in a decade. She reprises her visit to the UK in October for shows in London, Brighton and Glasgow, to coincide with the release of Beautiful. Also available from Matchbox Films is the complete Margaret Cho Boxset, out on the 7th of November 2011.