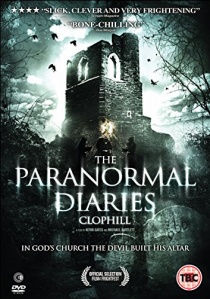 In March 1963 a black mass was held within the ruins of a church in the small English village of Clophill. Tombs were desecrated and animals sacrificed during the macabre ritual.

Fifty years on, following numerous reports of strange apparitions since that infamous ceremony, an investigative film crew was assembled to interview eyewitnesses and set up camp within the church ruins. During the long night ahead they hoped to capture some kind of paranormal presence. Nothing however could have prepared them for the terrifying scenes they were about to witness and the events that followed.

The Paranormal Diaries: Clophill is released on DVD on 14th October 2013, courtesy of Second Sight.