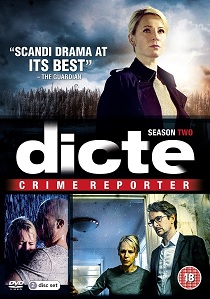 Following the success of gripping Scandi-noir drama Dicte Crime Reporter, the acclaimed series returns for its second series and following its run on More4, arrives on DVD courtesy of Acorn Media International alongside Dicte Crime Reporter Season One and Two Box Set on 7th August 2017.

Divorced crime reporter Dicte Svendsen (Iben Hjejle - High Fidelity) has returned with daughter Rose to her hometown of Aarhus where she is trying to escape the past and build a new future.

In season two Dicte is contacted by her father who she has been estranged from for many years and a sudden tragic turn of events finds her investigating a prostitution ring, diamond smuggling and a hitand-run that not only links them but will bring the unknown, the unpredictable and the deadly into the lives of Dicte and police investigator John Wagner.

From football hooliganism and match fixing to sado-masochism and murder, missing children and a mother's lost love, Dicte is a brash, quick-witted reporter, who is not afraid to take risks or put her own life in danger. Even if it means straying to the wrong side of the law or jeopardising every relationship in her life, Dicte will stop at nothing to uncover the truth.