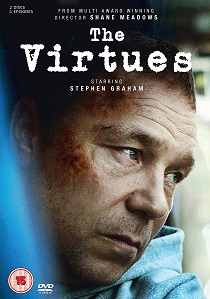 Stephen Graham stars as Joseph, a moral yet troubled man who's lost everything he ever held dear as The Virtues arrives on DVD 24th June 2019 from ITV Studios Home Entertainment.

Joseph finds himself compelled to travel to Ireland to confront the demons that continue to haunt him from a childhood spent in the care system, a journey that will have savage and brutal consequences. His path soon crosses with that of Dinah, played by Niamh Algar. She's fiery and more than able to stand up for herself, but like Joseph she's also deeply guarded, holding close a secret she's hiding from all those around her.

Joseph and Dinah's lives spiral intensely in and out of control as they both try to ground themselves, torn between morality and self-indulgence, defined by drug-induced self destruction, traumatised by their own harrowing histories, and yet enlightened by their dual faith in companionship. Survival instincts kick in as they pave their way to an unnerving and tormented future. Neither of them thought their lives would ever tangle into a delicate love story.