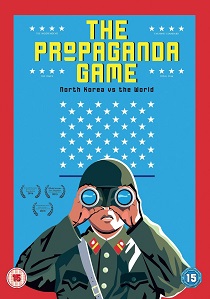 NewsSpecial Interest
News Article Go back to homepage
Directed by Alvaro Longoria, the documentary feature The Propaganda Game, released on DVD by Metrodome on 16th May 2016, visits North Korea to separate the truth from the lies.
Alejandro Cao de Benós
Álvaro Longoria
Álvaro Longoria
Metrodome
1 hour 15 minutes
16/05/2016
#ThePropagandaGame
Thank you for supporting DVD365.net when you order using the link(s) below. As an Amazon Associate we earn from qualifying purchases
Buy DVD
Information

Directed by Alvaro Longoria (Sons of the Clouds), the documentary feature The Propaganda Game, released on DVD by Metrodome on 16th May 2016, visits North Korea to separate the truth from the lies.

North Korea. The last communist country in the world. Unknown, hermetic and fascinating. Formerly known as "The Hermit Kingdom" for its attempts to remain isolated, North Korea is one of the largest source of instability as regards world peace. It also has the most militarized border in the world, and the flow of impartial information, both going in and out, is practically non-existent. As the recent Sony-leaks has shown, it is the perfect setting for a propaganda war.

The film has been shot in North Korea with privileged access to Alejandro Cao de Benós, the only foreigner who works for the communist government. The film analyses the interests of the different players and the strategies they use to manipulate the truth. False news, half-truths and surreal controversies that will lead the viewers to reach their own conclusions and reflect on how difficult it is to discern the truth.