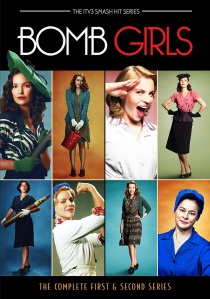 Set during World War II, Bomb Girls tells the remarkable stories of women who risked their lives in a munitions factory, building bombs for the European front. Liberated from social and cultural restrictions, they embrace their new found freedom, changing their lives - and the world around them - forever.

This release includes all 18 episodes from the first two seasons of the Canadian wartime drama and follows Gladys (Jodi Balfour), Kate (Charlotte Hegele), Betty (Ali Liebert) and Lorna (Meg Tilly) as they come up against a variety of different challenges and battle traditional cultural stereotypes.

Series one episodes are: Jumping Tracks, Misfires, How You Trust, Bringing Up Bombshell, Armistice and Elements of Surprise

Series two episodes are: The Quickening, Roses Red, The Enemy Within, Guests of Honour, The Harder We Fight, Where There's Smoke, Party Line, Fifth Column, Something Fierce, Romeo Foxtrot, Kings and Pawns and Blood Relations.