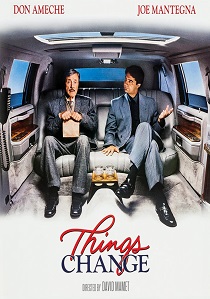 The Mob force unassuming shoe-shine man Gino (Don Ameche, Trading Places) into taking the hit for a murder he didn't commit. The pay-off? A fishing boat in Sicily when he gets out. Small-time crook Jerry (Joe Mantegna, House of Games) takes Gino on one last jaunt to Lake Tahoe before his term begins, but, when Gino is mistaken for a major league gangster, the duo soon fall prey to local hoodlums...

An unexpected change of pace for Mamet, Things Change benefits from an intelligent, witty script and superb central performances from Ameche and Mantegna, who received Best Actor awards at the Venice Film Festival for their efforts.

DVD
For the first time in the cinematic history of Spider-Man, our friendly neighborhood hero's identity is revealed in Spider-Man: No Way Home, released on DVD, Blu-ray and 4K UHD 4th April 2022 from Sony Pictures Home ... END_OF_DOCUMENT_TOKEN_TO_BE_REPLACED
Top PicksView