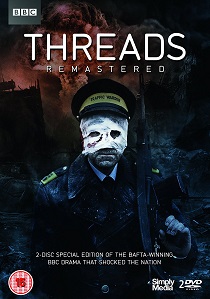 Written by Barry Hines (Kes) and directed by Mick Jackson (The Bodyguard), Threads, the BBC drama which shocked an entire generation is given a meticulous 2k restoration from the original BBC CRI 16mm prints. This remaster is available for a limited time only, and is exclusive to the UK.

Winner of four BAFTAs including 'Best Single Drama', the story follows everyday Sheffield townsfolk as they struggle to survive nuclear attack and the years of that follow. Originally broadcast at the height of the nuclear paranoia of the 80s, it sent shockwaves throughout the country and arguably changed the global political discourse on nuclear war.

This 2-disc set, released on DVD 9th April 2018 from Simply Media, presents the original film remastered in 2k, available uncut for the first time in the UK.